Awarded for the first time in 2006, FIFA’s best young player award is usually a hotly contested prize to honour the best player aged 23 or under.

This time, however, there was surely no contest…

Kylian Mbappé does not celebrate his 20th birthday until December but the France forward has been an undoubted star of the 2018 World Cup and follow in the footsteps of the 2006 winner, Lukas Podolski, Thomas Müller in 2010 and France teammate Paul Pogba four years ago by taking the award. Let’s have a look at the other outperformers in this category…

Three goals in three World Cup matches is a record of which any striker would be proud, so to manage it as a defender is quite an achievement. Mina formed a powerful defensive unit with Tottenham’s Davinson Sánchez. Mina’s headers in the matches against Poland and Senegal and the last‑minute equaliser against England made him one of the top performers for Colombia this time.

Playing alongside Diego Godín for club and country has helped to make him one of the best young defenders in the world, with a series of outstanding performances in Russia cementing that reputation. The last-minute goal against Egypt kickstarted Uruguay’s impressive campaign and his tears before the end of the defeat against France in the quarter-final will be an abiding memory of the 2018 tournament. Giménez is closing in on 50 caps despite not celebrating his 24th birthday until January.

It was a cruel way for one of the outstanding young performers at the tournament to bow out. The deflection off Emil Forsberg that sent Sweden into a quarter‑final meeting with England at Switzerland’s expense was just about the only foot Akanji put wrong in his four matches in Russia and he looks set to have a successful career after moving to Borussia Dortmund in January for around €18m from his Swiss club Basel. A powerful figure with great timing in the tackle, he was outstanding in the 1-1 draw against Brazil.

A relative unknown before the tournament, the Stuttgart defender has proved invaluable to France and capped his performances with a superb goal from outside the area against Argentina in the last 16. With doubts over the fitness of Djibril Sidibé, the 22‑year‑old has provided a solid base on the right flank and has allowed Kylian Mbappé to thrive in attack.

And who will ever forget this goal… !!

The Atlético Madrid player has established himself as a dependable presence in Les Bleus’ defence, filling a more orthodox left-back position in Didier Deschamps’ lop-sided formation. It has worked a treat as France have conceded only four goals, thanks in no small part to his speed and agility that augments a formidable backline led by Barcelona’s Samuel Umtiti and Raphaël Varane of Real Madrid.

Outstanding in the opening victory against Germany when his goal derailed the World Cup holders, Lozano was a constant threat for Mexico despite their failure to repeat that surprise start as the tournament progressed. His pace caused problems for every opponent and showed just why the 22-year-old is tipped to leave PSV Eindhoven this summer. 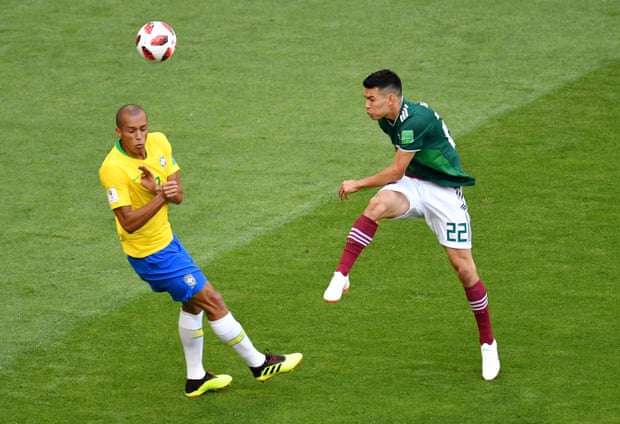 Considering he is three years younger than many players on this list, the achievements of France’s new superstar have been astonishing. From the barnstorming run from the edge of his own box to win his side a penalty against Argentina to the improvised skill from kick-off against Belgium that left Jan Vertonghen for dead to the brilliant second-half performance in the finals… Mbappé has thrived in the knockout stages and looks already like a leading contender to win the Ballon d’Or.