Considering the plethora of expectations this franchise always carries, the movie’s number of actual missteps is only a tiny fraction of the potential missteps inherent in an undertaking this vast and complex.

The movie became a cultural phenomenon. It got people excited and talking, it brought families and friends to theaters… It’s Marvel’s Universe. We live and celebrate it.

In a way, Avengers Infinity War is this generation’s Empire Strikes Back or Indiana Jones…

As the Avengers and their allies have continued to protect the world from threats too large for any one hero to handle, a new danger has emerged from the cosmic shadows: Thanos. A despot of intergalactic infamy, his goal is to collect all six Infinity Stones, artifacts of unimaginable power, and use them to inflict his twisted will on all of reality. Everything the Avengers have fought for has led up to this moment – the fate of Earth and existence itself has never been more uncertain.

Ah, how times passes. It seems like only a couple of Marvel movies ago that the original Avengers—Cap, Iron Man, Thor, Black Widow, Hulk, Hawkeye—were duking it out with Tony Stark’s high-end, ill-advised kitchenware Ultron and his shiny utensil-minions. But actually, and take a deep breath… that was eight Marvel movies ago !! Feeling old yet?

Before the deep-dive, first things first.. I know movies are not supposed to be viewed like this, but Avenger’s Infinity War must not be considered as an independent film and rather the start of the series finale… A series which started 10 years ago with 18 installments.

It’s a whole another debate regarding pros and cons of serialization of cinema, but considering this movie as a standalone movie is doing injustice to the storyline and character development done over the course of 10 years and 18 movies… Never has the “Marvel Cinematic Universe” seemed like more of a universe, in ways both good and bad.

The primary purpose of this movie is not character introduction and rather development and merging of several storylines into the bigger narrative. Infinity War is a narrative juggling act the likes of which I’m not sure I’ve ever seen before.

It is far from a perfect movie, but it is probably close to the best movie it could have been…

The movie does an admirable job of trying to maintain a cohesive story as it’s spread across multiple planets, multiple teams and multiple heroes all meeting each other for the first time. There are clear winners in terms of screen time — and clear focuses as far as narrative is concerned — but, by and large, the balance could have been a lot worse than the finished product.

The tone of the movie manages to keep up the pace as well, bouncing between the lighthearted humor of franchises like Thor and Guardians of the Galaxy with the gritty thriller feel of something more in line with Captain America: The Winter Soldier with surprising ease. There really aren’t any moments where the jokes feel out of place, and, even more surprising, the earnestness of the emotional moments feel hard-earned and sincere.

Also, while the massive fight sequences in the latter half of Infinity War may approach a suitably epic scale, they suffer from the same problems that plague a lot of these films. The dynamic and exciting heroes are facing an endless slew of basically shapeless aliens straight out of a video game.

Of all the things that have ever happened in an MCU movie, there will be much chatter about the ending of “Infinity War.” It is dark and spooky and, in its way, chancy and shocking. Do any of our beloved characters die? Well, yes. But, in fact, the ending is so audacious that you realize it’s all an elaborate card trick. 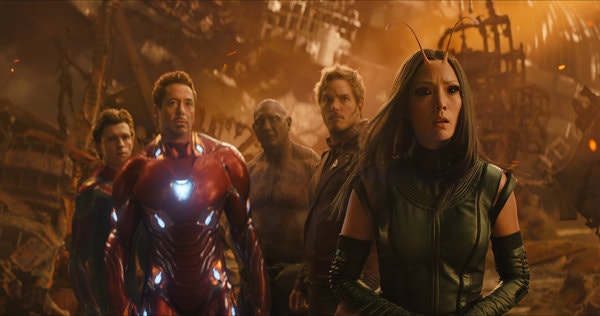 It’s obvious that this is very, very much a movie that is building toward its sequel, to the point that it feels like the end is actually the middle of a five-hour movie rather than the finale of a two-and-a-half-hour one. (again, serialization v/s standalone !!)

That feeling — the abruptness of the ending, the “left in the lurch” lack of satisfaction — is certainly the most bold and brazen risk-taking the MCU has dared try in the last decade, at the very least.

Characters
The Russo brothers are at their best simply letting Robert Downey, Jr., Chris Pratt, Chris Evans, Chris Hemsworth (so many Chrises !!), Benedict Cumberbatch, Chadwick Boseman, and the rest bounce off one another with their inherent charisma. The variety of ways in which the heroes pair off is unexpected and mostly enjoyable.

Perhaps surprisingly, Thor emerges as the MVP here among the Avengers.  There is no disagreeing that this guy has become the most improved in the MCU and special thanks to Taika and the Russo Brothers for reinventing the character through Thor : Ragnarok. Thor’s entrance back to Earth with Rocket and Groot was absolutely badass, and got undoubtedly the biggest cheer in the theatre 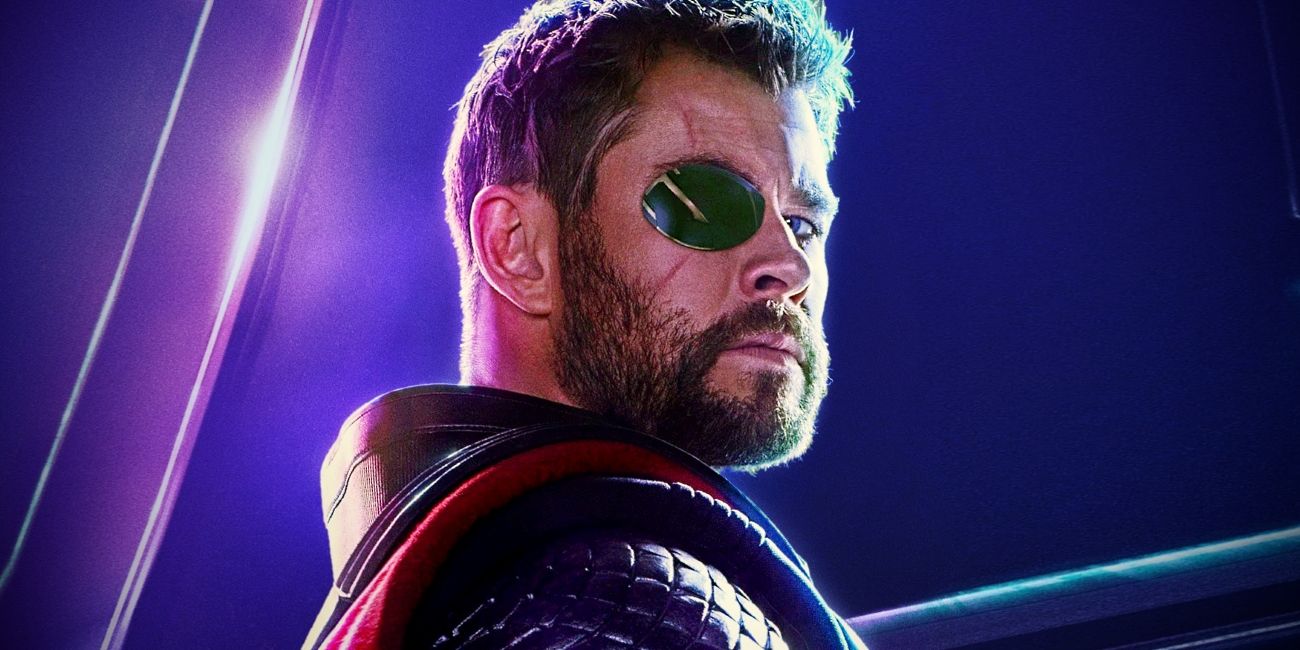 Tony Stark’s character was rock solid as usual and got even more depth by the end. Something I haven’t seen anybody mention is the conversation between Thanos and Stark , with him telling Tony that they’re both “cursed with knowledge,” to which Tony replies “My only curse is you.” Tony has spent every movie since The Avengers struggling with PTSD and paranoia that there’s a larger threat out there, something they weren’t prepared for. It’s completely consumed him, and now he finally gets to see the thing he fears the most. The Russos have such a great understanding of these characters… !!

Tom Holland also fucking killed it in the ending sequence. It’s amazing how much he made me feel for his character even though he’s a newer addition. His death was definitely the hardest to watch.

On the other end, one of the few issues with the film is how little Black Panther, Cap, Black Widow got to do. Specially, as great Chris Evans is in his scenes, those expecting the Steve Rogers show were a bit disappointed. 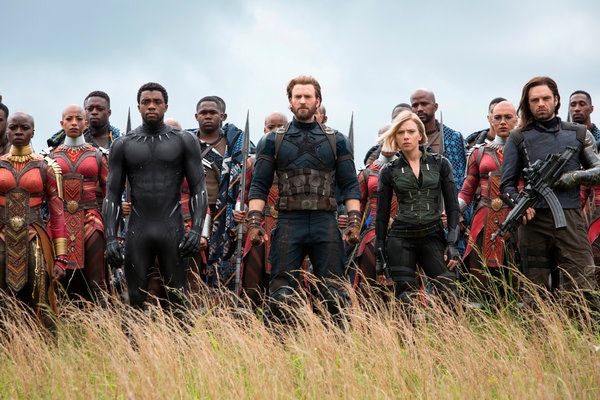 Then, there’s Thanos…
This movie could easily be named as ‘Thanos and The Infinity Stones‘, as it becomes pretty clear at the end that he’s the protagonist of this installment, which is one of the most sensible decisions taken by the writing team. Most of the Avengers had good character development over the course of 18 movies, and this one was the perfect platform for Thanos to step up and shine… 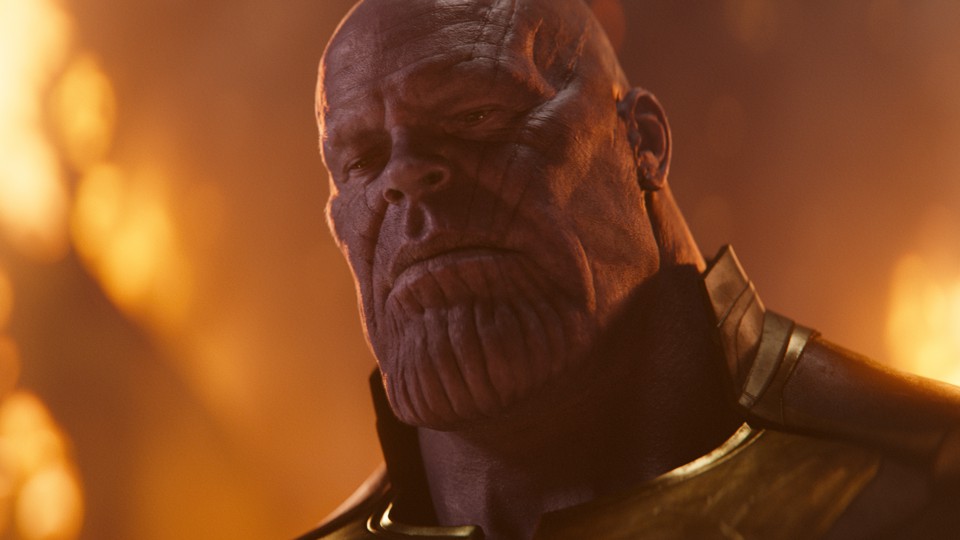 The central flaw of many Marvel movies to date has been the relative lameness of their villains… Ronan the Accuser? Malekith the Dark Elf !!  Thanos is very much in the studio’s top tier. He’s no Killmonger, with his problematic but hard-earned racial politics, or Loki, with his wicked yet adorable mischief, but he’s in the same league as them.

Josh Brolin’s portrayal of Thanos is an unexpectedly resonant monster, filled with sadness and even a perverse sense of honor. Thanks to improved CGI, the capture of Brolin’s expressions on Thanos was spot on… Deranged though it may be, his population-control rationale for mass murder is actually an upgrade from the comics, in which he mostly wanted to kill trillions just to earn a date with the female embodiment of Death !!

Far from being evil just for the sake of it, this mega-powerful alien genuinely believes that he’s doing what’s best for the survival of the universe, and he even manages to draw on our sympathy at times. At others, he is a terrifyingly destructive force of nature, literally brushing Earth’s Mightiest Heroes out of his path with a slight wave of his hand.

Thanos got his sunset at the end. This was his movie…

Forget the actual movie, kudos to the entire Marvel team for efficiently handling an ensemble so big, a story so convoluted. It’s something every comic book reader pictured in his imaginations, but they made it into reality.

Marvel Studios has never produced a film quite like Avengers: Infinity War – and you find out why when you see it. Some will undoubtedly hail it as the greatest superhero movie of all time, and while that’s obviously debatable, there’s no doubt that The Russos have delivered on 10 years of build-up and next-level anticipation.

Yes, it is a little hard to talk about Avengers: Infinity War in full, if only because we’ve only seen the first half of this story. The Marvel Cinematic Universe began 10 years ago and was built on the notion of an interconnected world full of heroes with shocking new powers. Infinity War, by design, feels like one half of a completed puzzle, with the other pieces strewn about waiting to be put together. Maybe once it’s whole, the puzzle will be even more satisfying… 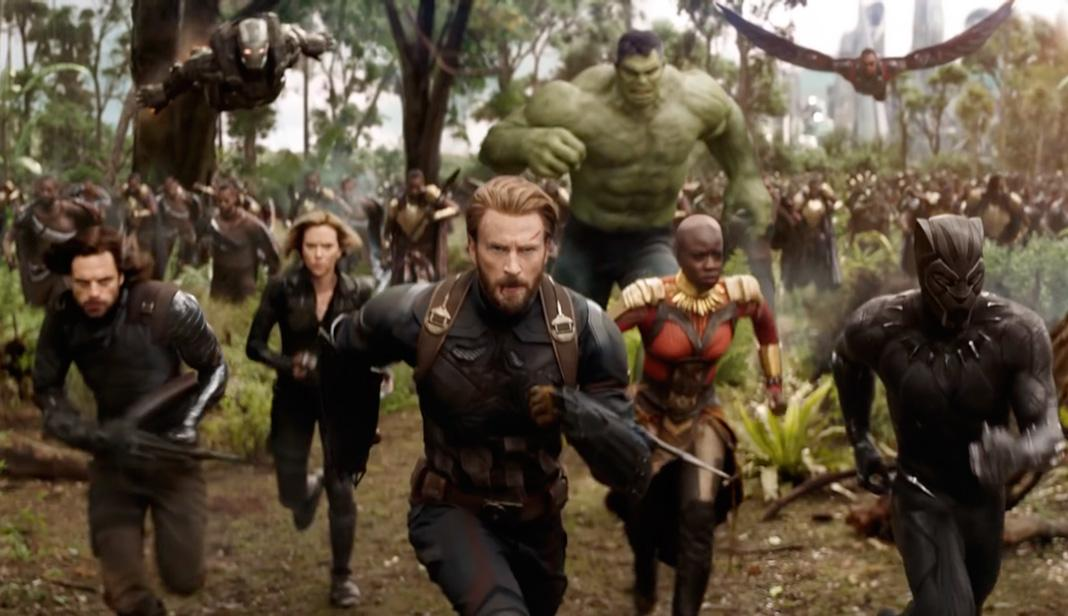