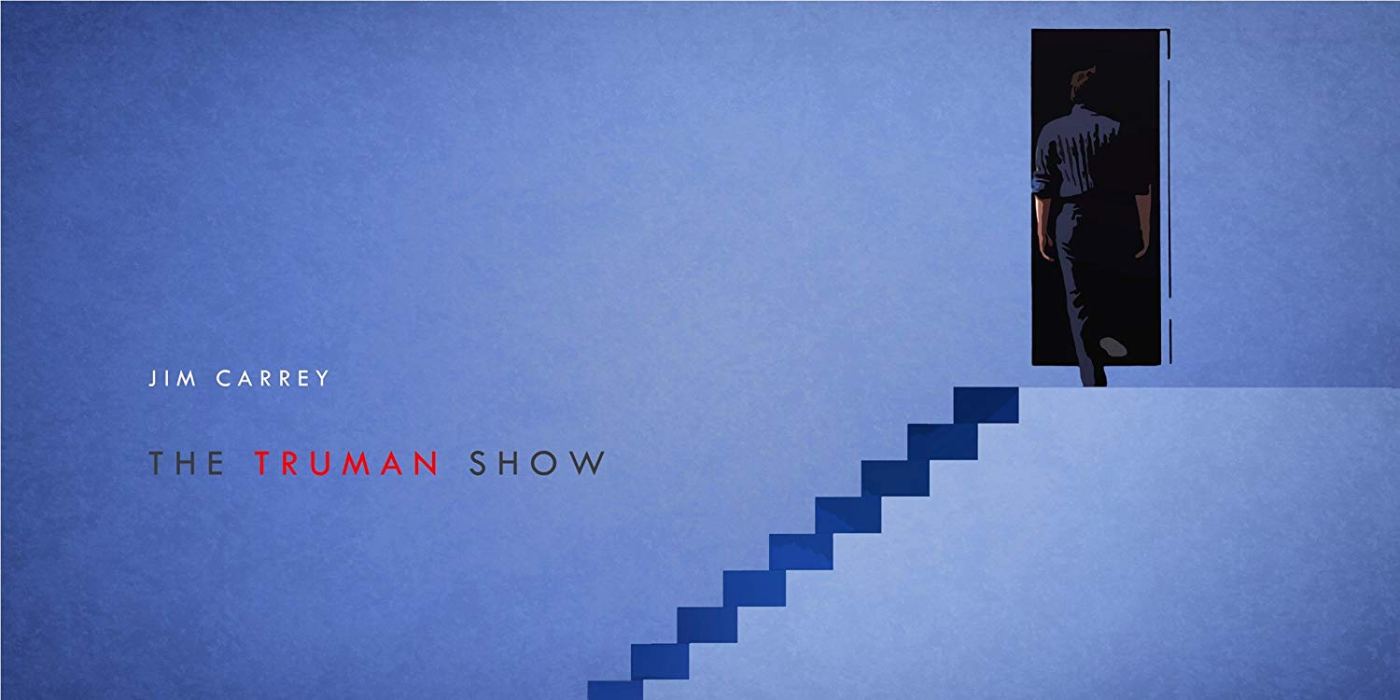 It’s a cautionary tale about the invasive, corrupting nature of a society that believes it has the right to watch everything. And as we all know, it’s a point that gets more prescient as we edge into the second millennium. With reality shows defining millennial TV and communications technology advancing with increasing rapidity, a real life Truman Show becomes ever more likely !!

Truman Burbank (Jim Carrey ) is the protagonist of a 24-hour TV soap opera that functions as an extension of normal fictional soaps into the territory of ‘reality programming’. The creation of a producer called Christof, Truman was born and has lived his entire life inside a synthetic world, located on an ‘island’ created inside a giant dome that functions as a mega-studio. Truman’s family, neighbors and colleagues are all actors. The weather is as artificial as the small personal crises that Christof injects into Truman’s life in order to retain the interest of a worldwide audience numbered in billions.

The basic idea of The Truman Show is not exactly astonishing in the current world. You’d need to have been dead for the last 10 years not to understand that the commercial imperatives of the mass media have changed the relationship between information and entertainment in most people’s lives. But Peter Weir’s film is so cleverly conceived and brilliantly executed that it almost seems like a fresh thought even now. And even if it doesn’t, it nevertheless forms the basis of a very witty exercise.

What makes this movie even more timeless than some of the other sci-fi hits is the level on which it functions as a beautiful, satirical allegory…

It’s one of the ironies of science fiction movies that while they concern themselves with either the future or at least technology that doesn’t yet exist, they generally have more to say about what’s going on in the present than any of the other genres. By the end of the ’90s, media saturation, anxiety over privacy, encroaching media power and, with virtual reality, the increasingly unreliable nature of the real world were the prevalent preoccupations, like the movie predicted…

A few years later after this movie, you wouldn’t be seeing music videos on MTV anymore; you’d be seeing reality shows...

In 1994, Jim Carrey broke big, starring in Ace Ventura: Pet Detective, The Mask, and Dumb and Dumber, three box office toppers that catapulted the rubbery-faced comedian to global superstardom. There was an entire generation of kids that went around quoting those movies, repeating Ace’s catchphrase of “Alrighty then !!”

Carrey is on the perfect note in the movie as a guy raised to be liked and likable, who decides his life requires more risk and hardship. Given that it’s a movie with an all out attack on the media’s need to control, package and present real life, it may explain Carrey’s disgraceful Oscar snub… !!

Ed Harris also finds the right notes as Christof, the TV svengali. He uses the technospeak by which we distance ourselves from the real meanings of our words. Screenwriter, Andrew Niccol gives Christof an assumption of omniscience that Ed Harris turns into a brilliant parody of the repulsive and deluded self-seriousness of just about every TV person you will ever meet.

The Truman Show could also just be seen as a story about a kid outgrowing his playpen—in which case Christof becomes the overprotective father who wants to shelter Truman from the real world. There’s clearly a layer to the movie that seems designed to make us think about how the media shapes our perceptions, as well. As Christof puts it, “We accept the reality of the world with which we are presented.”

The mere fact that such a wealth of weighty ideas can be extracted from a PG-rated film is a testament to Truman and his sublime innocence. Two decades after its release, his story remains fresh in how it illuminates aspects of the human condition: bringing notions of selfhood and reality into the light like a bright beam peeking over a premature horizon, called forth by a man in a control room with the words, “Cue the sun.”