The 7-1 is like a ghost. It’s present. People still talk about it, but the more you talk about it, the less likely it is that the ‘ghost’ disappears.

If football is its religion, then Brazil just found out that night that its god isn’t real… This was more than just an upset, different to mere disappointment. This was humiliation.

For seven first-half minutes, Germany conjured football of a savagery unwitnessed against significant opposition in the tournament’s history. This was football as blood sport. Between the eighth second of the 23rd minute and the 49th second of the 29th minute Germany, one goal to the good already, scored four more, piercing Brazil’s defense with such frequency and brutality never seen before. It was a nation’s dreams being sluiced down the plughole in a stream of saltwater.

It’s so unbelievable that BBC had to spell out 7 in Post Match Show… !!

In the 23rd minute, when Miroslav Klose became the first man to score 16 World Cup goals and put Germany two up, television cameras picked out a female Brazil fan, face painted green and gold, a single tear rolling down her cheek. A minute later Toni Kroos sent a first-time, left-footed shot screaming into the net from the edge of the area, and cameras focused on another female fan, looking at her companion in utter bemusement.

Neymar, Brazil’s forward and talisman, had been injured in the quarter-final against Colombia and watched the semi-final at home. Midway through the second half, with his mother Dona Nadine weeping, Neymar switched off his television. The dream of leading his team to victory – or, given his injury, simply cheering them on from the sidelines – was over. 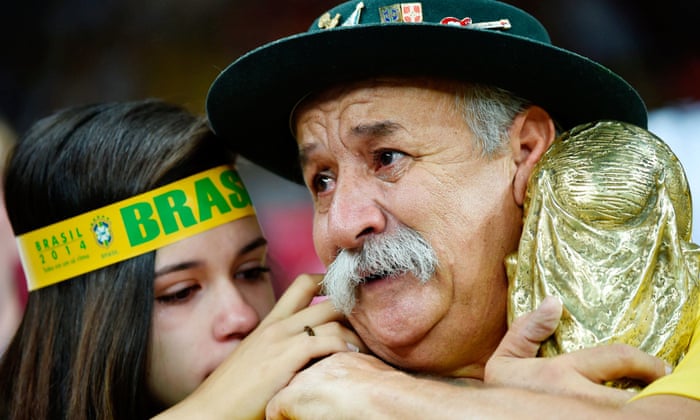 Meanwhile, on Germany’s bench, coach Joachim Löw had a question for his assistant, Hansi Flick. “Hansi, tell me,” he asked, “is this actually happening?” Löw describes his feelings at this point as “a mix of absolute joy and disbelief. It was 5-0, in a semi-final against the hosts. It was unbelievable”.

A little over 15 minutes later Löw gave a half-time team-talk surely unlike any other, one in which he felt compelled to ask his players not to be too good. “I didn’t want anyone to make a fool of the Brazilians in front of an audience of millions,” he said. “The respect the Brazilians showed to us, across the country, was enormous. And for me, it was completely unthinkable that we should humiliate them, or to show arrogance towards them.”

It was Brazil’s first World Cup semi-final defeat for 76 years, and their first defeat at home in any competitive match for 39 years. It was their most emphatic defeat of any kind for nearly a century, since Uruguay beat them 6-0 in 1920.

The crowd are whistling. Something has happened. Marco Materazzi is on the ground. The match commentators are confused. Their eyes, and the eyes of hundreds of millions of people around the world, were on the other end of the pitch. They did not see it.

Gianluigi Buffon did. He races to the officials on the sideline, demonstrates and points fingers. By now the rest of the players have joined in. In the midst of it all one man is calm. Zinedine Zidane just stares ahead. Having talked with his assistants, the referee, Horacio Elizondo, approaches the French captain. A red card is waved. Zidane, with an arm around his shoulder, tries to explain that he had been provoked. It is all to no avail. 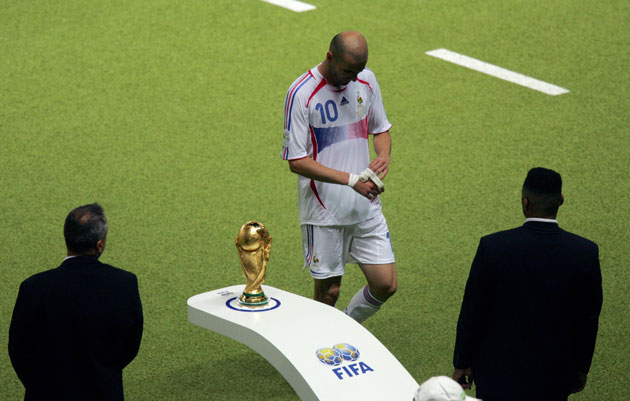 Three weeks before the end of La Liga’s 2005-06 season, it was time for another announcement from Zidane. This was it for him. He was done with club and international football for good.

He actually hadn’t been in fantastic form for Real Madrid in the previous two seasons, and there were even calls for him to be left out of France’s XI starting XI after the group stage, in which he missed Les Bleus’ only win – coming against Togo in the final match – due to suspension.

But after scoring in the second-round victory over Spain, the then-34-year-old rolled back the years against Brazil in what was the first meeting between the two sides at a World Cup since the midfielder’s two headers had fired France to glory in the 1998 final.

At one stage he held off Kaká while juggling the ball and later he would knock it over Ronaldo’s head, making the World Cup winner look like a lost schoolboy searching for his mother. He ran the game. From the first moment, when he signalled his intent by carving through the yellow shirts, to the last, when he pushed up front in search of the killer goal. And in between he delivered the most memorable touches, the sweetest moves.

Zidane had given France the lead in the final in the most audacious fashion. There cannot be too many players who would have the confidence and audacity to successfully execute a Panenka in a World Cup final but Zidane did. Deep in extra-time he almost doubled his goal count for the game.

The various videos and angles of the build-up to the headbutt show Materazzi’s mouth moving but his words can only be heard by one person, the one person who matters.

“I prefer the whore that is your sister,” Materazzi would later admit to saying. It was the sort of schoolboy insult that Zidane, and thousands of other professional footballers, must have heard from fans, and indeed fellow players, on a regular basis. Something, however, snapped that evening in Berlin and in Zidane. All the beauty and brilliance of his play in the knockout stages melted away and what was left was his anger and aggression. “I tried not to listen to him but he repeated them several times,” said Zidane. “Sometimes words are harder than blows. When he said it for the third time, I reacted.”